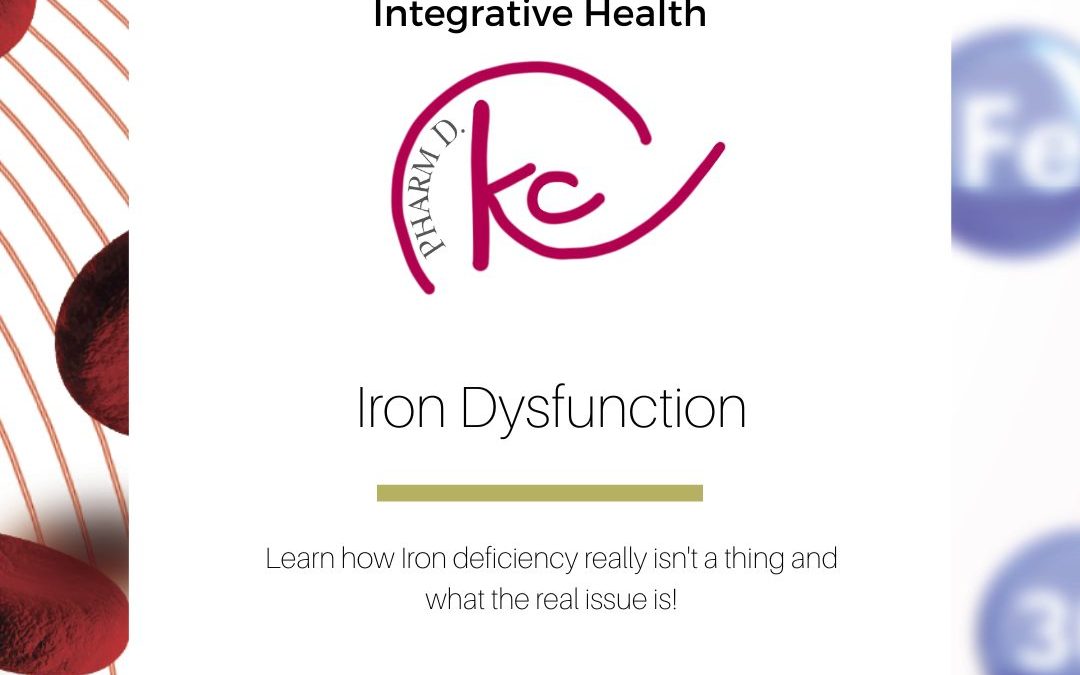 You’ve probably heard yourself or know someone who has been told they are Iron deficient, have anemia or just need more Iron in their diet. This is linked to many things such as hormonal issues, gut imbalances, thyroid dysfunction, skin issues and more.

Do you know someone that has been diagnosed with low iron anemia or iron deficiency?

Many people are told they are anemic for the wrong reasons and so I’d love to share why iron deficiency doesn’t really exist and reasons why you just need to help the iron that you have work for you and not necessarily take more.

Overall, we require 1 milligram of iron per day, and the way our food system is set up with all of the added iron and unprocessed foods that come in through the dietary standard is more than even 25 milligrams of iron per day. This amount of iron is unnecessary for our bodies, especially since we have an iron recycling system.

If it isn’t working properly due to retinol deficiency, we’re just taking more iron that isn’t being used.

The bioavailable copper, in which copper and retinol play an important role, allows it to be recycled in this recycling system. It consumes the dying red blood cells as long as it has what it needs to allow the iron to enter the recycling system.

Copper releases iron and allows it to hold to transferrin, a transport protein that transports it back to the bone marrow and helps it work with red blood cells.

2 reasons why our iron recycling system is not working correctly:

Are the two things that are needed to really activate the recycling system. It’s not that we don’t have enough iron; it’s that our iron isn’t working for us in this recycling system, that has gone unnoticed for far too long.

You might know someone that probably has been told they are anemic and might even be on an iron supplement but with this information, you can see that we do not need more iron. We need our iron recycling system to work for us and it kind of all goes back to that retinol and copper plays a huge role.

Even in our food system, we used to get a lot of retinol and copper from our foods, but because of acid rain, chemicals like glyphosate, and soil conditions, we only get a small fraction of what we used to get from our food. It used to be a lot more balanced, so we didn’t have a lot of these problems, but now we are deficient in copper and retinol.

Tune in the video below as I discuss how Iron deficiency really isn’t a thing and what the real issue is!

Keep it in motion

You’ve probably heard about how you need to include more iron-rich foods in your diet or maybe you’ve even been prescribed an iron supplement.

Maybe it was because you’re struggling with different issues such as fatigue, different markers on your blood work  were off and your doctor suggested that you either get more iron via foods or you need to take an iron supplement.

Iron overload is a condition of excess iron in the body

And so I want to share with you the reasons why we need to avoid being overloaded by iron and need to keep it in motion. We don’t need more, we simply need to make the iron we have work for us!

Iron is available in our food sources so abundantly, therefore we don’t need really any more iron from outside sources- especially if our recycling system is working!

In your journey to wellness, you may have tunnel vision… which likely has you chasing your tail.   Check out this free video training to help you see the bigger picture,  gain clarity, and finally move forward in your health!

Other than blood loss, our body doesn’t have any way of getting rid of excess iron.

That’s why we need to prioritize certain nutrition and lifestyle changes to help our iron be in motion via the recycling system. Iron is absorbed in the digestive system, where it will subsequently build up.

It will essentially sequester and become stuck in various cells and organs like the liver, spleen, and bone marrow

It does this in order to hide from different pathogens that come along because they can actually feed off of this extra iron. It gets stuck in these tissues and in our organs which can weigh them down and not allow them to do the job. If our liver can’t work, other things are going to happen from that and so this iron recycling system becomes very important. Our Iron recycling system is taking iron from the tissue into our blood where it carries out many functions.

We have this recycling system that helps our body to produce 24 milligrams of iron every 24 hours.

Ceruloplasmin is a glycoprotein that is used to transport the majority of copper in the blood.

It’s a very important part of the system needed for it to function properly. The ceruloplasmin is regulated by copper and vitamin A, it’s like the juice needed to make the whole recycling system work.

When copper/vitamin A levels are inadequate, ceruloplasmin will be low and will impact the system then this will lead to more iron being stored in the tissues as it can’t be in that recycling system properly.

The iron that is stored in tissues can lead to things like inflammation, high-estrogen symptoms, and chronic issues.

This can make wellness difficult. So I want you to dig further down to see what is actually causing our iron not to work properly instead of just taking more iron!

In your journey to wellness, you may have tunnel vision… which likely has you chasing your tail.   Check out this free video training to help you see the bigger picture,  gain clarity, and finally move forward in your health!